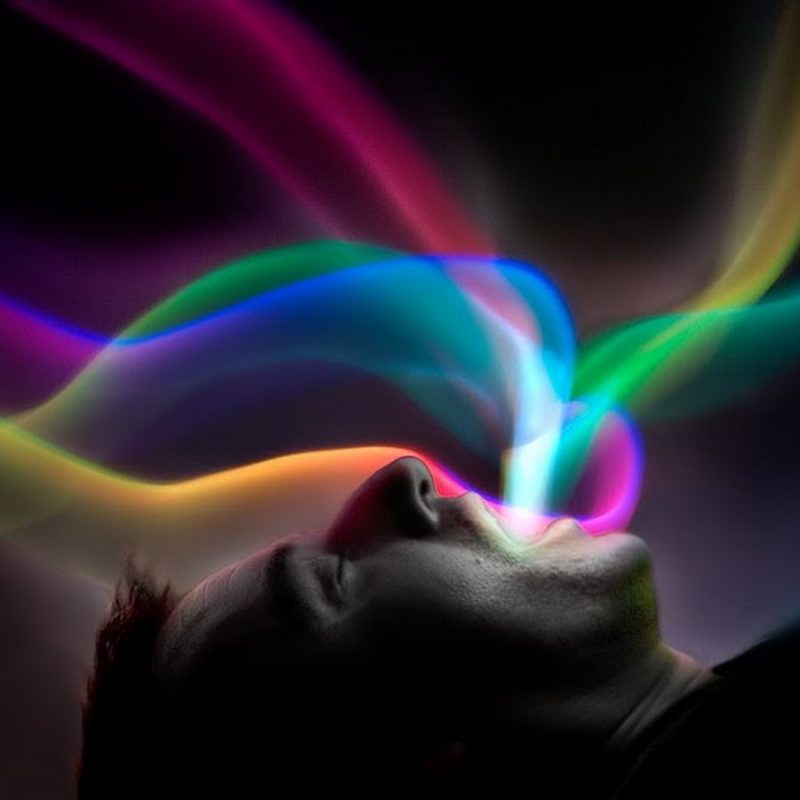 To an outsider, that room in Costa Rica probably looked like the scene of a midday slumber party. Half of our group of 16 or so people were lying on makeshift beds of plush pillows, blankets on and eye masks secured; the other half sitting alongside, occasionally swaying to the rhythmic music playing. After a while, though, the rapid breathing would have given us away: We were all gathered for a holotropic-inspired session, hoping to use the breath to explore different states of consciousness.

The history of this breathing routine.

This method of breathwork was created by Czech psychiatrist Stanislav Grof, M.D., an early researcher of psychedelics drugs. Once LSD started to be banned around the world in the 1960s, Grof relocated to the U.S. to teach psychiatry at Johns Hopkins—all the while still thinking about how people could tap into the mind-expanding benefits of psychedelics without actually taking drugs. Holotropic Breathwork® is what he and his wife Christina came up with, and they have since trademarked the term.

Grof, who is still considered a thought leader in spiritual psychology, has since taught this method of breathwork to hundreds of facilitators, and it’s now a popular technique for safely exploring the subconscious. 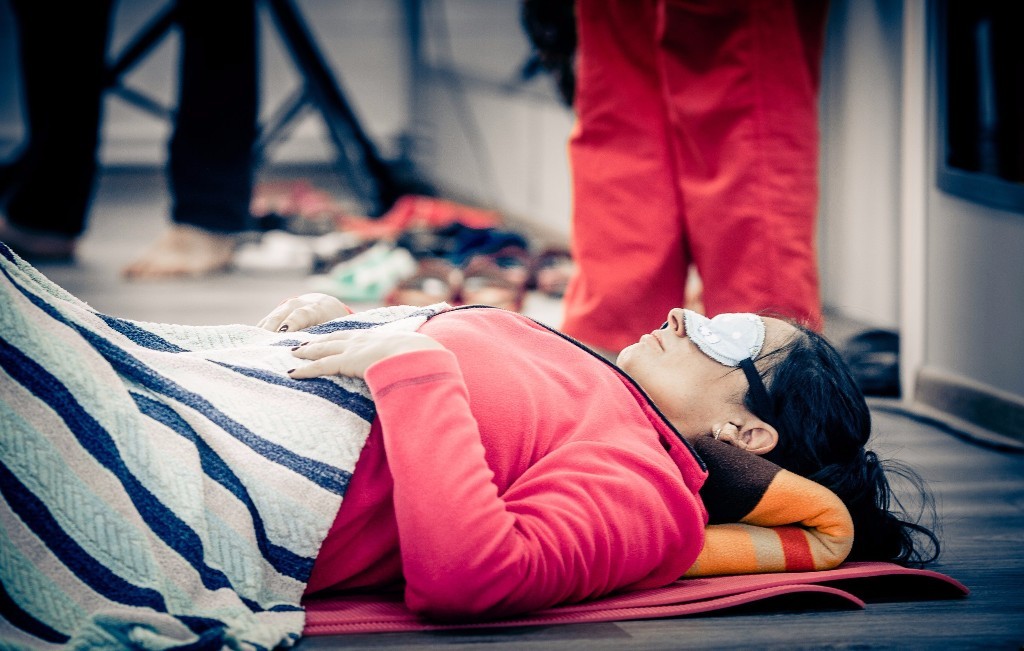 What happens during a session?

While other breath manipulation techniques like alternate nostril breathing (Nadī Shodhana) and 4-7-8 breath follow a particular rhythm, this breathing method just requires taking full, deep breaths as fast as you can for a long period of time, usually two to three hours.

As alluded to earlier, it requires participants to get really comfortable: The technique is typically performed lying down with the eyes covered. Music plays the entire time, and while facilitators are present, they don’t speak much and instead let the music guide the experience.

Each breather is also accompanied by a spotter, who sits next to them the whole time and can provide a hand if the breather needs a drink of water or to be led to the bathroom. “Having another person there gives you the safety to go to different places [in the mind],” Erica Matluck, N.D., N.P., a naturopathic doctor and a facilitator of my own holotropic-inspired experience, explains. (Since Matluck is not a Grof-certified practitioner, the session was not a totally authentic Holotropic Breathwork® session, but it incorporated some elements of the technique.)

In a traditional session, after one breather finishes, they color in a mandala before trading places with their spotter. There are typically multiple breather-spotter pairs in the room at once. After everyone has a chance to breathe, the group gathers to share thoughts and reflections. So while you can technically try this breathing technique out on your own, it won’t give you the true experience. 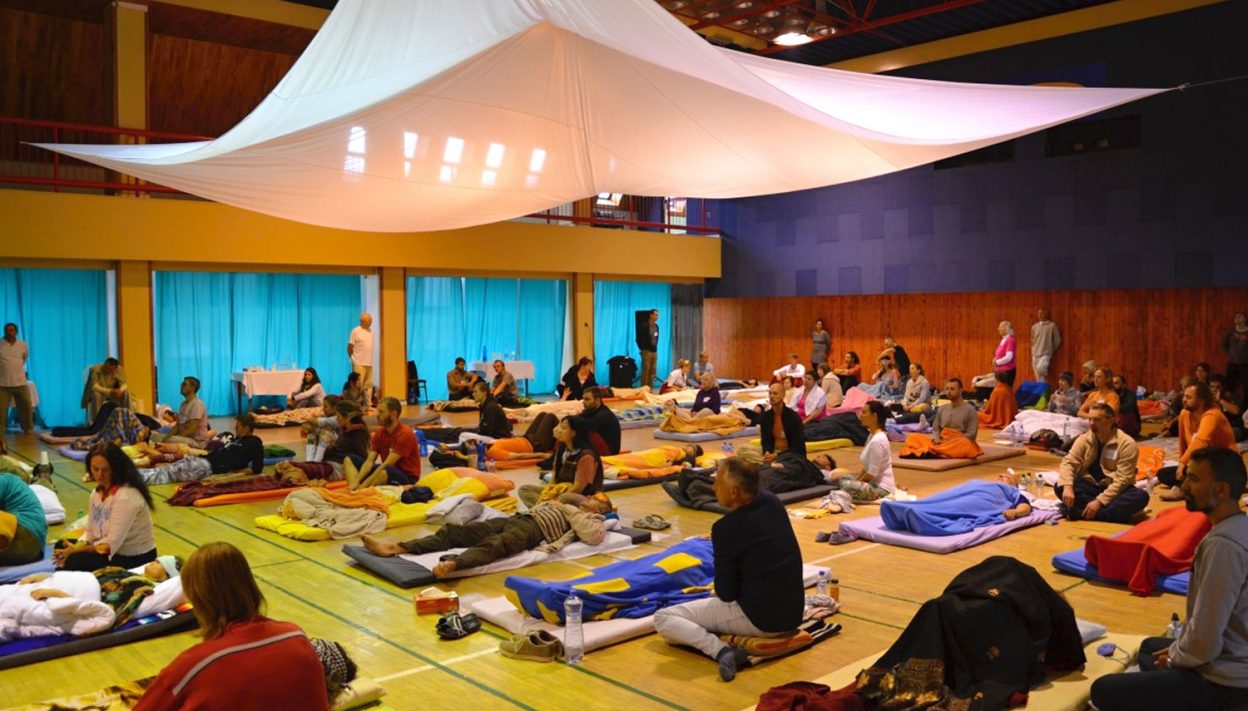 This breathing method changes the flow of carbon dioxide and oxygen in the body. “You’re almost having the signs and symptoms of the experience of hyperventilation, but there seems to be some regulatory mechanism that keeps you from going into a full-on hyperventilation syndrome,” says Matluck of the physiological mechanisms of this technique. “Instead, you move into this altered state of consciousness.” And everyone will experience this state a little differently.

Though I’ve always known the breath to be powerful, I went into my holotropic-inspired session having a hard time believing that simply taking deep breaths could do much of anything. But then, just a few minutes into the practice, my mind went to a place that is difficult to describe (like Matluck said, it can be a hard thing to put words to). I suppose it felt like dreaming while awake.

Over the course of the two-hour session, I never felt out of control; just the opposite actually. I felt more in tune with my body than I had in a really long time. At one point I started dancing to the music. At another point I settled into a deep stretch. Each movement took on new depth and exaggeration, which actually started to freak me out. Realizing how much I could shift with my breath made me think back to childhood when I would suffer from panic attacks. There were a few dicey moments there, but I was able to work through them by reaching out for my spotters hand and continuing on with the breath, maintaining trust that the feeling would pass. It did, and at the end of the experience, I was rewarded with visualizations of some of my closest friends and family.

All in all, my session was a lesson in freedom and autonomy, and the reward that can come on the other side of a wound. This tracks with what I’ve heard that other people feel during their respective journeys.

In the largest study done on the effects of this breathing method (conducted on a group of 11,200 psychiatric inpatients in Saint Anthony’s Medical Center in St. Louis, Missouri, over a 12-year span), 82% of those polled reported feeling transported to another place or time, while 16% reported revisiting prior life experiences. Only 2% said that they didn’t feel anything during the session.

Another study out of Denmark in 2015 found that after 20 participants found that they all reported positive changes in self-awareness after a session. Another 1996 report concluded that the technique could improve “death anxiety and self-esteem” compared to verbal psychotherapy.

Why does this happen?

While we are pretty certain that this breathing does something to the body, nobody really knows what. Scientific research hasn’t identified what exactly happens in the brain during this practice and why it can be so transportive. In a world that loves answers, this remains a big question mark—and in some ways that makes the mysterious practice all the more powerful.

“Part of what you’re doing when you move into a breathwork like this is you’re letting the intelligence of your body, of your psyche, of your whole holistic self guide a process—which is very different from most of the ways we heal in our culture,” says Matluck.

Her advice for anyone considering trying a new breathwork practice out for themselves? “Be open to the mystery. Be open to going into uncomfortable places, and know that every sensation, every feeling, every emotion, everything is going to pass. It’s an opportunity. Trust it.” 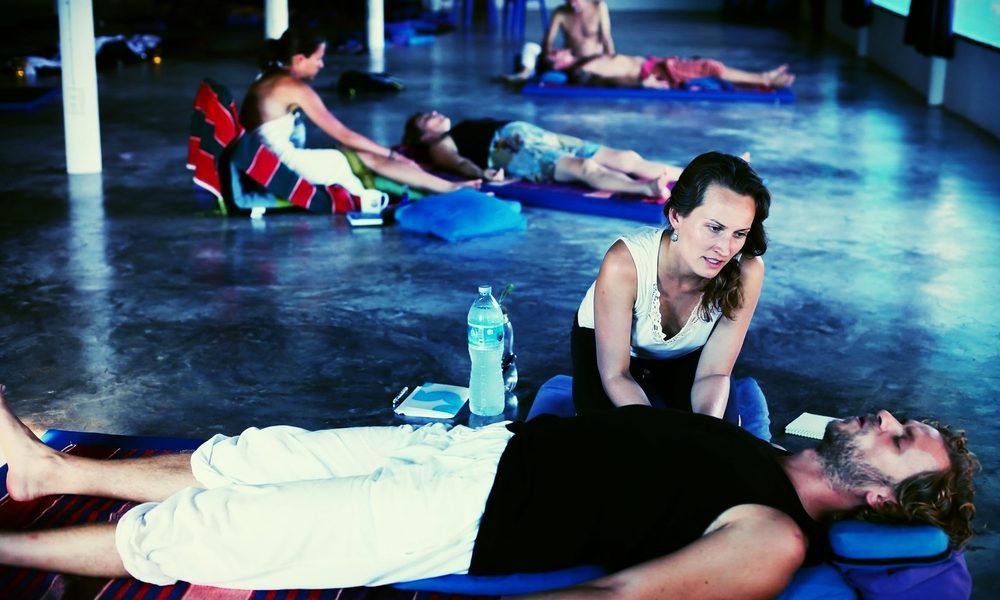 The Holotropic Breathwork® practice has a lot of built-in safety nets: The facilitator, sitter, and onslaught of pillows are all there to make the breather more comfortable. And in that giant hospital study, none of the 11,000-plus participants showed adverse reactions during or after their sessions.

While the breathwork routine itself won’t cause the body harm, though, some of the images it evokes might be painful and difficult to process. Since the experience may bring you face-to-face with old traumas or wound patterns, it’s important to trust your facilitator and the other people in your group and feel as if you will be supported from them after the experience ends. “Particularly for people with mental health issues,” Matluck adds, “it’s probably a good idea to have done some work with a therapist before you go into a state like this.”

How often to do it.

The goal of Holotropic Breathwork® is to dig around your subconscious mind for insights you can apply to your day-to-day life. Some people might feel equipped to do so after just one session, while others might leave itching for more time.

“I think there are some people who have a really potent experience and don’t feel drawn to do it again, and that’s fine,” Matluck says of any mind-expanding breathwork practice. “But I think there’s definitely therapeutic value in doing it multiple times or deepening your practice with it. The more comfortable you become in that altered state of consciousness, the more you learn to work with it.”

Quotes For Single Women To Live By