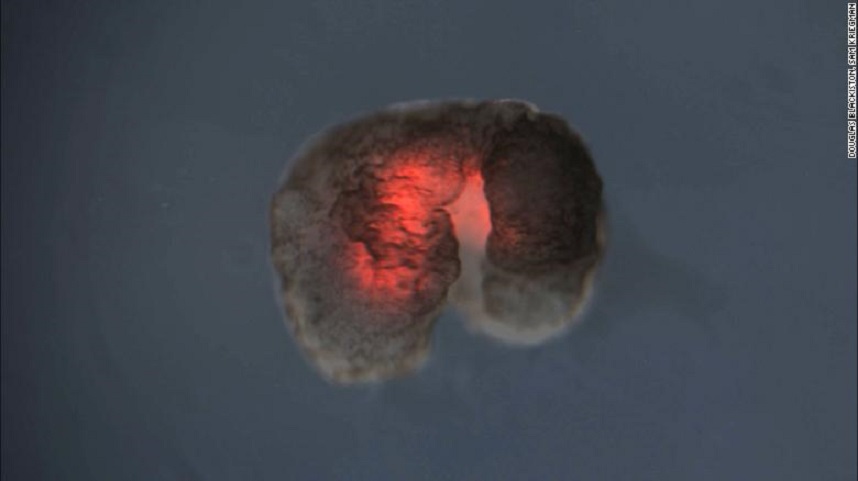 Named xenobots after the African clawed frog (Xenopus laevis) from which they take their stem cells, the machines are less than a millimeter (0.04 inches) wide — small enough to travel inside human bodies. They can walk and swim, survive for weeks without food, and work together in groups.
These are “entirely new life-forms,” said the University of Vermont, which conducted the research with Tufts University’s Allen Discovery Center. 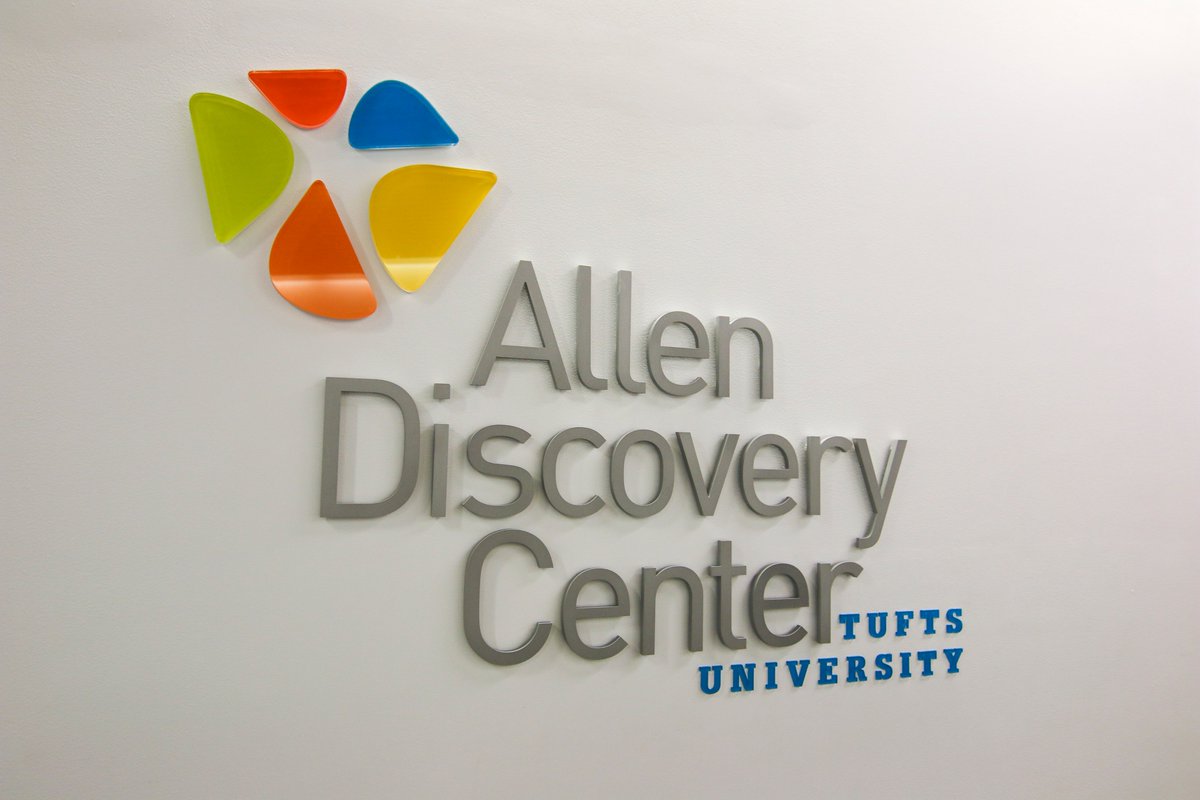 Stem cells are unspecialized cells that have the ability to develop into different cell types. The researchers scraped living stem cells from frog embryos, and left them to incubate. Then, the cells were cut and reshaped into specific “body forms” designed by a supercomputer — forms “never seen in nature,” according to a news release from the University of Vermont. 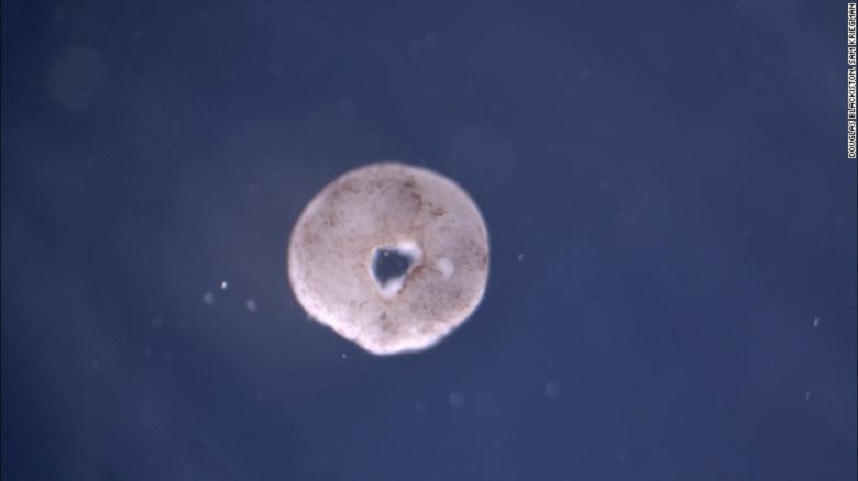 Some xenobots had holes in their center — which could potentially be used to transport drugs or medicines.
The cells then began to work on their own — skin cells bonded to form structure, while pulsing heart muscle cells allowed the robot to move on its own. Xenobots even have self-healing capabilities; when the scientists sliced into one robot, it healed by itself and kept moving.
“These are novel living machines,” said Joshua Bongard, one of the lead researchers at the University of Vermont, in the news release. 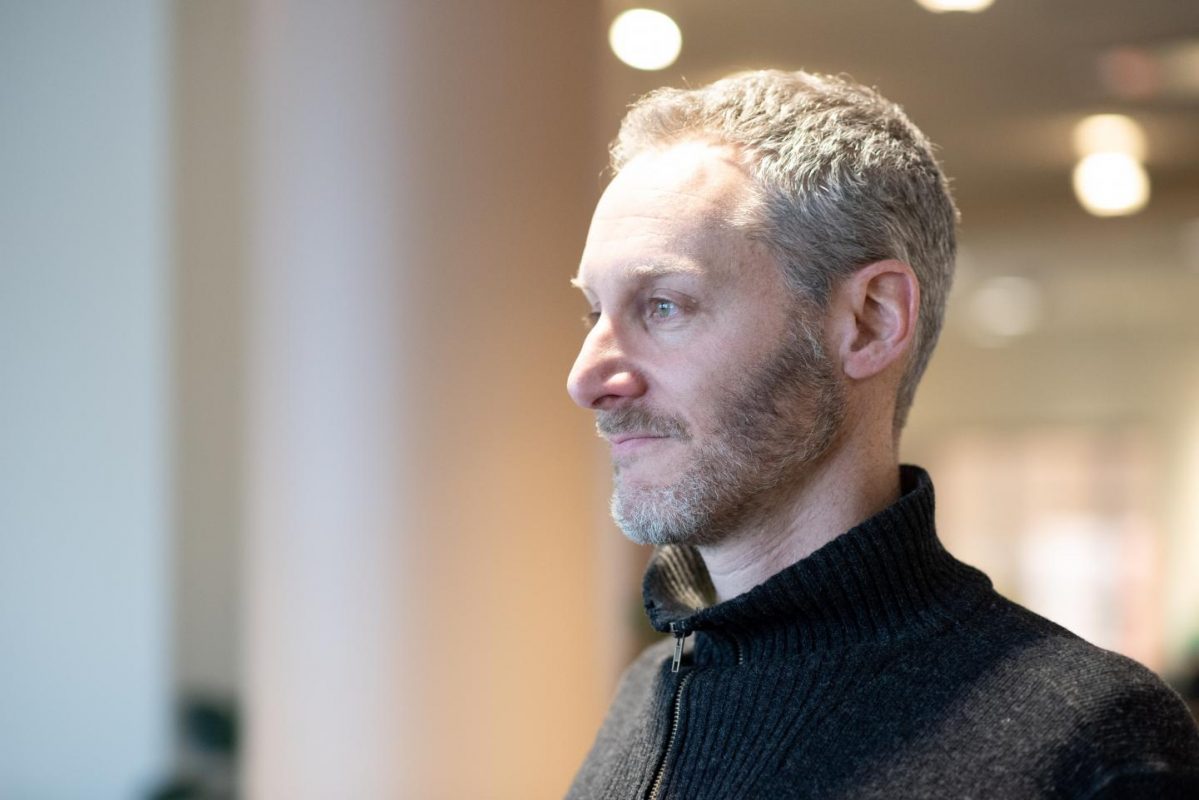 Joshua Bongard
“They’re neither a traditional robot nor a known species of animal. It’s a new class of artifact: a living, programmable organism.”
Xenobots don’t look like traditional robots — they have no shiny gears or robotic arms. Instead, they look more like a tiny blob of moving pink flesh. The researchers say this is deliberate — this “biological machine” can achieve things typical robots of steel and plastic cannot.
Traditional robots “degrade over time and can produce harmful ecological and health side effects,” researchers said in the study, which was published Monday in the Proceedings of the National Academy of Sciences. As biological machines, xenobots are more environmentally friendly and safer for human health, the study said.
The xenobots could potentially be used toward a host of tasks, according to the study, which was partially funded by the Defense Advanced Research Projects Agency, a federal agency that oversees the development of technology for military use.
Xenobots could be used to clean up radioactive waste, collect microplastics in the oceans, carry medicine inside human bodies, or even travel into our arteries to scrape out plaque. The xenobots can survive in aqueous environments without additional nutrients for days or weeks — making them suitable for internal drug delivery.
Aside from these immediate practical tasks, the xenobots could also help researchers to learn more about cell biology — opening the doors to future advancement in human health and longevity.
“If we could make 3D biological form on demand, we could repair birth defects, reprogram tumors into normal tissue, regenerate after traumatic injury or degenerative disease, and defeat aging,” said the researchers’ website. This research could have “a massive impact on regenerative medicine (building body parts and inducing regeneration.)”
It may all sound like something from a dystopian sci-fi movie, but the researchers say there is no need for alarm.
The organisms come pre-loaded with their own food source of lipid and protein deposits, allowing them to live for a little over a week — but they can’t reproduce or evolve. However, their lifespan can increase to several weeks in nutrient-rich environments.
And although the supercomputer — a powerful piece of artificial intelligence — plays a big role in building these robots, it’s “unlikely” that the AI could have evil intentions.
“At the moment though it is difficult to see how an AI could create harmful organisms any easier than a talented biologist with bad intentions could,” said the researchers’ website.