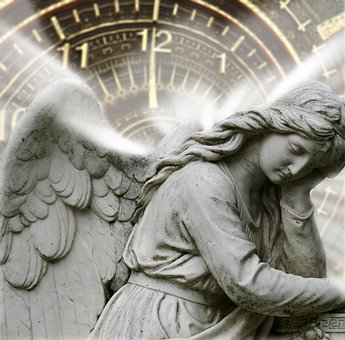 If you’ve ever heard the expressions, “What goes around comes around,” or “You reap what you sow,” you already know a little something about karma. According to who you ask, karma operates in accordance with 12 specific rules or laws. Here, we’re outlining what karma is all about, plus the 12 laws that rule it, according to spirituality experts.

Karma is a central theme in Eastern religions, namely Hinduism, Buddhism, and Jainism. In these religions, karma can be defined as “the sum of a person’s actions in this and previous states of existence, viewed as deciding their fate in future existences.”

According to Steven Vose, Ph.D., a visiting assistant professor at the University of Colorado at Denver and religious studies expert, karma begins to appear in religious text as early as the Upanishads, a foundational text that laid the groundwork for Hinduism around 800 to 200 B.C.

He adds that the text makes it clear that humans act in accordance with their desires, and these actions are our karma. In other words, karma is action—for better or worse. So for those who believe in karma in this sense, he explains, “it’s a matter of learning how to sever one’s connection with one’s desires—partly through renunciation, through self-control through the body, with meditative and ascetic practices that we might call yoga. Ultimately, that was a way to short circuit the cycle of karma.”

And in the cycle of reincarnation, he adds, it’s even believed karma can transcend lifetimes, theoretically explaining why bad things happen to good people—and vice versa.

The idea that our actions have consequences can be seen throughout Western religion as well, though the word karma may not necessarily be used. The notion of heaven and hell in Christianity, for example, can be thought of as another explanation for how karma is at play in our lives. 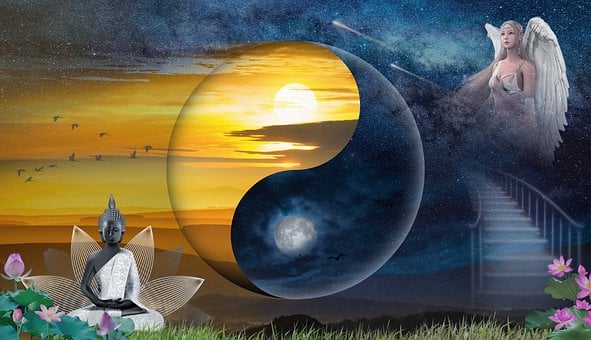 Karma can be thought of as a system at play all around us, even though we can’t see it. The 12 laws of karma, then, are simply the rules that karma “abides” by, much like the seven hermetic principles, and the 12 laws of the universe (which, you’ll find, have some striking similarities).

And as clinical psychologist Carmen Harra, Ph.D., previously wrote for mbg, “Heavy karma can trap us in the same old patterns by pulling us toward the same types of people, jobs, illnesses, events, accidents, and unneeded burdens. A much-needed break in the karmic cycle can occur when we analyze our personal karma and take the necessary steps to resolve it.”

By understanding the 12 laws of karma, we can figure out why we may be getting stuck in certain areas of our life as a result of “bad” or “heavy” karma, so we can free ourselves up from some of that weight:

The Great Law, also known as the Law of Cause and Effect, is the first law of karma on the list—and for good reason, as it lays an important foundation. As Vose explains, this is the main principle of how Indian traditions have always thought about karma and works essentially like Isaac Newton’s Third Law of Motion: Every action has an equal and opposite reaction.

2. The Law of Creation

Next up we have the Law of Creation, which according to Vose, is all about how your relationship to karma will influence the life you’re creating. In some cases, he notes, we can be unwittingly influenced by our own karma rather than actively creating the reality we want.

“For people who hold karma as a principle of ethics, the real question is, how do you react to the things that are in front of you now? Because karma isn’t just about your past. It’s also about your future,” he says, adding that we are always presented with a choice that will not only create our reality but influence our karma going forward.

3. The Law of Humility

The Law of Humility can be understood by thinking about what the word itself actually means. Humility is defined as “a modest or low view of one’s own importance,” and when it comes to karma, it takes humility to accept any bad karma that’s come back around your way.

As Vose puts it, this requires a longer view of your karmic weight, acknowledging (and accepting) you may be carrying negative karma you’re not even conscious of. He also adds that humility is necessary to attract good karma moving forward, as ventures approached with anything but a humble attitude aren’t exactly “good” from a karmic perspective.

4. The Law of Growth

Just as the universe is always expanding, so, too, is human consciousness on a collective and individual scale. And according to Vose, the Law of Growth relates to how rare and precious it is to be born as a human, “because you have such an opportunity to make decisions, to make moral and ethical choices.” Whatever personal growth looks like to you, he adds, “This is a lifetime where you can really make some serious progress, so don’t waste it.”

5. The Law of Responsibility

And Vose explains that it’s not always clear what your duty ought to be at any moment—but the key is ultimately to “take the time to assess what your responsibility or duty really is,” adding, “I think that’s actually the point of a well-examined life.”

6. The Law of Connection

The Law of Connection highlights the interconnectedness of all things. It says that beyond our senses, every thought, action, and event is in some way connected to anything and everything else. In Jain tradition, for example, Vose explains that it’s believed our souls are interdependent, creating an all-encompassing “network” of sorts.

And when we realize that our own karma is not only influencing us but this collective network, he adds, karma as a principle of ethics becomes that much more important. “It’s an invitation to ethical action—especially when it comes to environmentalism and things like that,” he tells mbg. 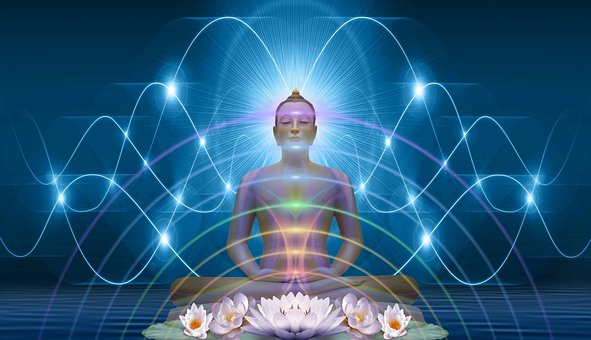 The Law of Focus, also sometimes called the Law of Force, relates to how we’re directing our energy at any given point. And the bottom line with this law, according to Vose, is how our mental application of focus or force translates to our karma.

As he explains, you can think of it in terms of where you’re putting your energy and what you choose to act upon. “Are we really giving the best of ourselves to the things and people we’re around? Are we being present? Are we being mindful?” he says. Asking yourself these questions can help you get clear on what kind of energy is actually driving your behavior.

8. The Law of Giving & Hospitality

Vose explains that the Law of Giving and Hospitality relates to the Eastern concepts of dāna and puja, with puja being acts of devotion, and dana being the practice of cultivating generosity. In relation to karma, he explains, “One of the key acts of puja really is showing hospitality to the thing that you’re honoring, whether that’s God, a guru, your elders, your parents or grandparents, and so forth.”

“And dāna,” he adds, is about doing these things selflessly, without expecting anything in return. It’s a true act of servitude and giving of yourself, which—you guessed it—results in “good” karma.

The Law of Here and Now involves releasing the past, as well as acting without projecting into the future. Vose notes that self-forgiveness can come into play with this law, as it’s easy to fret about things we know may have won us some bad karma.

“We can believe in paying for our crimes, [but] karma is going to do that for you eventually, anyway,” he explains, adding that in Buddhism, they think of karma as things that weigh on you. And so when we’re trapped in the past, we’re not in the here and now. Similarly, when we are too future-oriented, we’re also missing out on the present moment.

And this relates to both the laws of humility and giving and hospitality because your actions ought to be driven by a clear heart in the moment—because it’s the right thing to do—as opposed to any future things you hope to happen.

It was Albert Einstein who said, “Insanity is doing the same thing over and over and expecting a different result,” which Vose notes is a good way to sum up the 10th law of karma. We always have the option to change something—our mindset, our relationships, our living arrangements—it’s just up to us to do it.

Vose tells mbg that this law also relates to the idea of shaping your reality, growing, and being responsible for yourself. It’s an invitation, he says, to effect change, rather than having change affect you.

If karma can truly cross lifetimes, it should go without saying that you may not see results for good deeds—or bad ones—right away. In some cases, Vose says, you may be displeased to know your good karma might be rolling around in the next lifetime—though that’s not to say you won’t get any of it in this life.

The key is, of course, patience, for the long-term reward that comes with accumulated good karma. “I don’t know if that’s necessarily very satisfying to people, but it’s the thinking that there’s always a much longer trajectory for karma,” he adds.

12. The Law of Significance & Inspiration

And last but not least, we have the Law of Significance and Inspiration, which reminds us that we all have a valuable part to play in the human story. As Vose says, a teacher once told him, “It’s not that we’re unimportant, it’s that we’re infinitesimally important,” and that’s essentially what this law is all about.

In other words, “any one of our contributions may seem like a small thing in any one time, but the significance is to stick with it,” Vose says. After all, you never know which seemingly minuscule decision can ripple out and make waves. 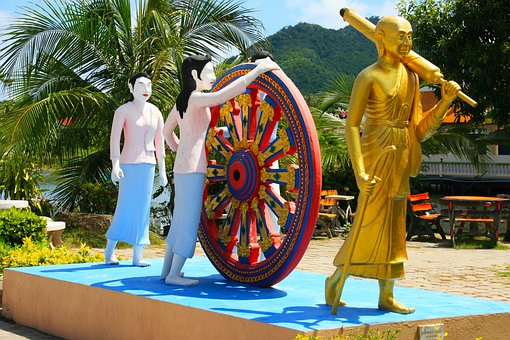 Karma can be seen throughout history across a number of different traditions and religions, with one central theme: You get what’s coming to you—for better or for worse. By understanding the 12 laws of karma, you can deepen your understanding of self, your motivations, and operate in a way that frees you from any heavy karma and invites in the good.

Why is Christmas celebrated on Dec. 25?