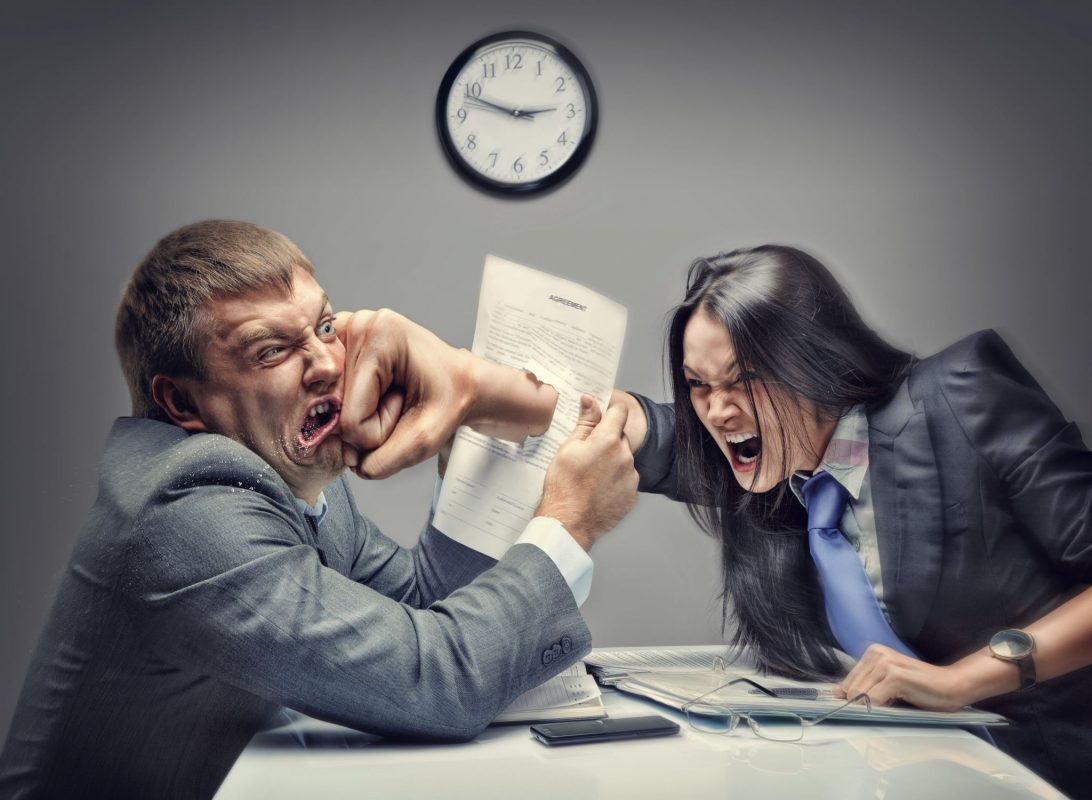 We spend half of our waking hours at work—and many more than that for some of us. In doing so, we put up with a lot of things that are outside of our control, things like long commutes, aching backs, and fluorescent lighting.

But while some things are out of our control, there are many more that we have influence over. One of these things is how we deal with toxic co-workers.

These men and women who do more than just steal your stapler and eat your lunch from the company fridge—these are people with something inside of them that compels them to hurt those they come into contact with. They’re the bullies, the rage-filled, and the deeply jealous. Their actions and attitudes can spread distrust and tension throughout an organization.

Fortunately, there are ways in which you can deal with this.

Taking action isn’t an easy path, and while it doesn’t always end well, but it is always worth a try—no one should have to spend half of their life being upset, bullied, or dehumanized. The health problems that can stem from a negative workplace environment are many. And in the face of such toxicity, our own reactions are often less than noble.

Fortunately, there are plenty of methods you can use to deal with these people the right way. You don’t need to throw their own tactics back at them—take a look at these 7 ways to deal with toxic co-workers, and you’ll be equipped to peacefully regain control of your own workplace happiness. 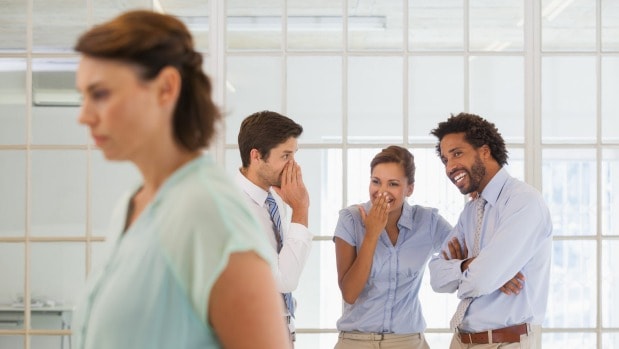 It’s your toxic co-worker’s responsibility to change their behavior, but you’ll need to make sure not to stoop to their level as you help them do so.

Gossip is one of those behaviors that makes you a part of the problem rather than a part of the solution. It breeds division and tribalism. It makes people uncomfortable.

And most of all, it almost always comes back to bite you when you’re trying to work things out with a nasty co-worker.

When you talk negatively about someone in an enclosed community—a workplace, in this instance—it will almost always get back to that person. And when it does, they can use the fact that you spoke badly about them as ammunition to discredit your claims.

And at a personal level, gossip only serves to pull you downward into a spiral of negativity. Instead of focusing on the potential for positive change in your toxic co-worker, you’re publicly focusing on their negative aspects.

This helps no one, so don’t give in to the temptation to gossip in the workplace. 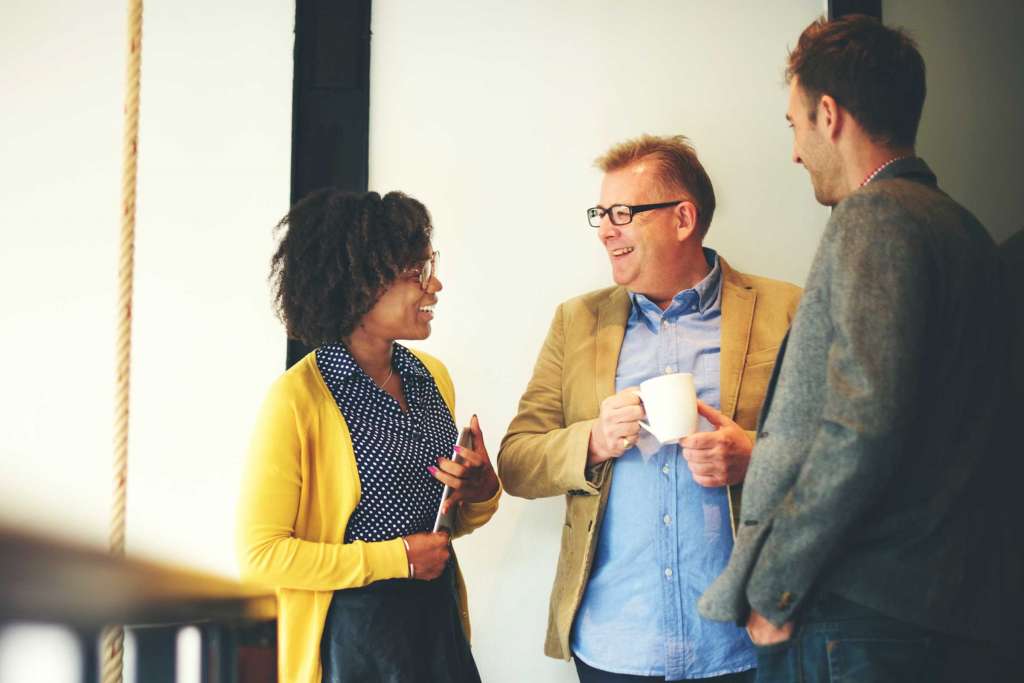 First, your offending co-worker cannot know they are causing you stress unless you say something. So do it. Tell them. Be professional, kind, and open-minded, and send that email. Better yet, casually meet in person for a few moments so that nothing is misconstrued.

Communication can break down any misconceptions or mistakes that may have arisen between the two of you. After all, what if Stacy snapped at you because she’s going through a divorce? What if Paul spoke over you in that meeting because he heard that you were trying to discredit him and take his job? These are simple things that can easily be rectified with a little communication.

If the situation is a little more serious, though, and you’re dealing with a truly toxic person, there are still steps you can take to regain your workplace peace. Read on to find out.

Figure Out the Problem 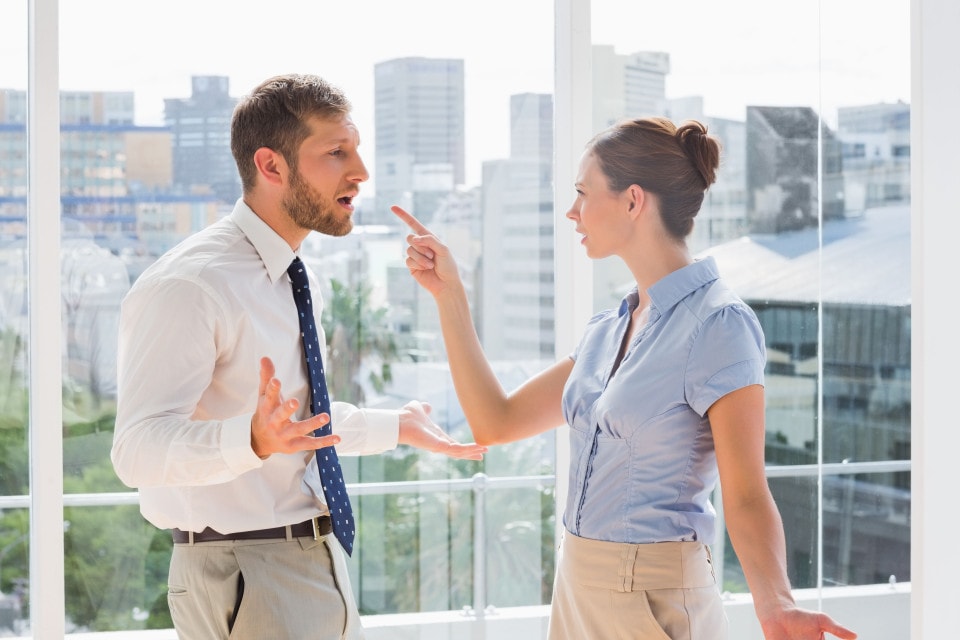 You may feel that your co-worker is toxic, but is he or she truly the problem? You need to make a sincere effort to find out before you take any other action.

Misunderstandings lie at the root of many negative workplace interactions. You may have a bad experience with someone and label them as “bad” or “toxic” or “confrontational,” and then, afterward, hold onto that image. Your co-worker goes from being a full, complex human being to a label.

But make an effort to examine the issue. Did your co-worker have one bad day, or is their toxic behavior an everyday thing? Are they simply tactless and lack social skills, or do they intentionally offend? Most importantly, did you initiate the toxic behavior?

Learn to critically examine situations like this so that you can determine the source and nature of the problem—this will determine what steps you should take next. 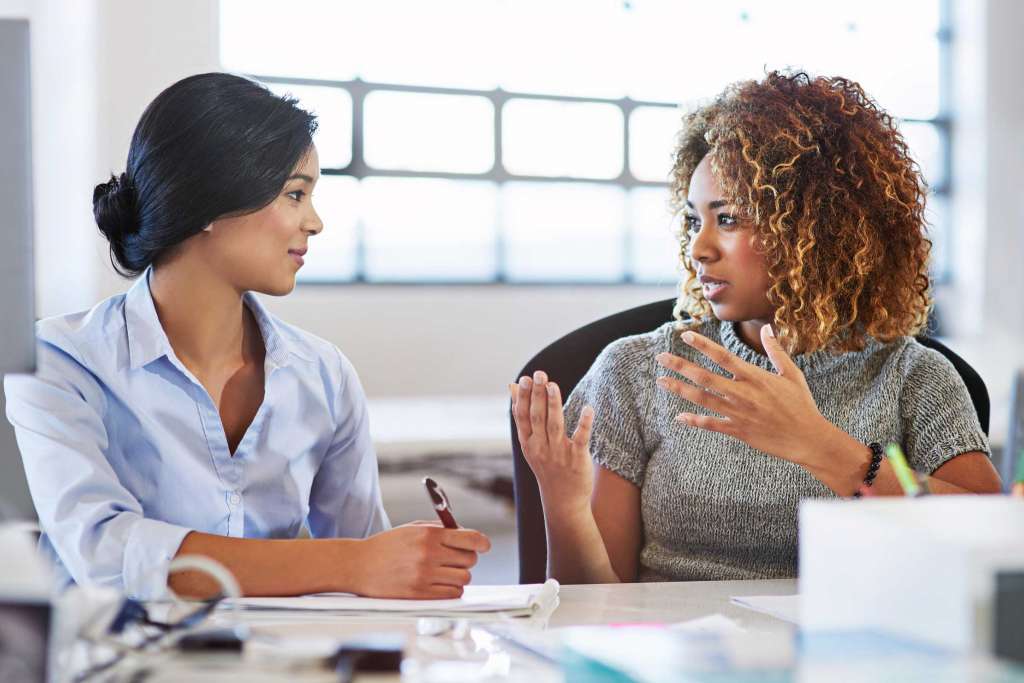 One of the best methods of conflict resolution lies in finding common ground. If you have a toxic co-worker that you just can’t get through to, this may be the road to peace and compromise.

Resolving conflict isn’t about getting the other person to entirely change their mind—that’s usually not possible. Resolution occurs more often when common ground is sought, and chances are, the two of you have at least a few goals in common. You just—thankfully—differ in the methods in which you obtain those goals.

Try to understand their point of view—why they feel the way they do. Listen to them without interrupting and after they’re done speaking, ask questions to clarify any points you don’t quite understand.

A truly toxic person won’t likely have a reasonable explanation for why they choose negative means of getting what they want, but at the very least, the two of you may be able to agree to certain terms.

Do you both want the chance for promotions and raises in the future, for instance? Talk about how working together peacefully might benefit the both of you in that way. Convince them that it’s in their best interest to treat you—and others—with respect, if not kindness. For those people motivated by personal gain, this will get through.

But if you’re working with a deeply toxic person who can’t be dissuaded even by mutual gain, it’s time to stand your ground, as we’re about to see. 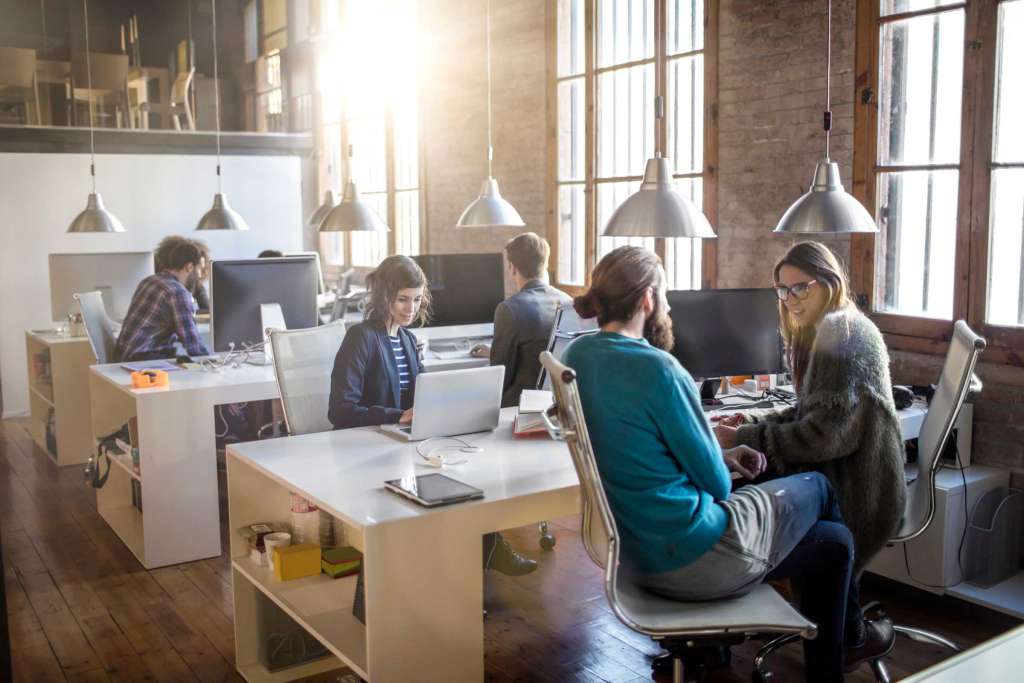 There are times in life when you’re going to have to accept that some things are out of your control, despite your best efforts. At these times, you may benefit from a change of perspective.

Changing your perspective means changing how you view your toxic co-worker’s affronts. Try not to dwell on their negative behavior—focus on the good that is going on in your workplace, and learn to see their behavior as their own problem.

Change the story you’re telling yourself. Being around someone who engages in hurtful behavior can cause us to internalize a negative message—you’re not good enough or you’re incompetent or you deserve the punishment.

But the fact is, where toxic people are concerned, you don’t. In fact, no one deserves to be dehumanized and abused. You are valuable. You are wonderful.

That is the story you need to start telling yourself.

By intentionally taking on a more positive outlook and learning to accept what you cannot change, you’ll be able to weather just about any kind of toxic behavior. 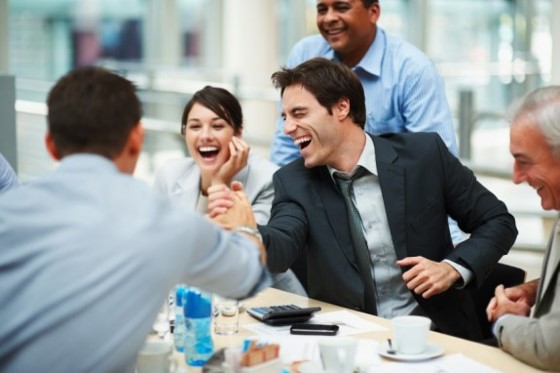 So you’ve tried just about every sort of diplomacy. You’ve communicated, investigated the root of the problem, tried to find common ground, and you’ve been on your best behavior, but still nothing changes. You’re bullied, intimidated, or treated like trash.

It’s time to set some boundaries.

This is where things get sticky. Set boundaries with a superior, and you may find yourself pushed out of your workplace. But when it comes down to it, do you really want to work for someone like that? Before you do this, make preparations for whatever may happen—including having a few potential jobs lined up elsewhere.

Setting boundaries is simple—you need to learn how to say “No”. When someone bullies you, respectfully tell them to stop. Do the same with intimidation or disrespect or unkindness. Shut it down.

The key to this is to shut these behaviors down immediately. Take the offender aside and bring up any violation of your boundaries as soon as possible—don’t let things fester.

Over time, these responses will build your boundaries in the mind of the toxic employee, hopefully deterring them from their destructive behavior.

As tough as it is to admit, we all need help sometimes. Going to a superior with your co-worker issues may feel like schoolyard tattling, but in reality, your boss needs to know if someone is harming productivity through their negative behaviors.

So do it. If you have a toxic co-worker who is making your life miserable, and who doesn’t respond to any form of diplomacy, it’s time to elevate things.

This is easier if the offending co-worker is just that—a co-worker who works with or for you. Going to a superior is as simple as collecting records of their behavior, going to your boss, and—respectfully—discussing the problems and why they’re hindering the organization as a whole.

If the toxic person, however, is your boss, things can get tough. You can collect records of bad behavior and go to a higher-up in the company, but be prepared for a fight. And if things don’t work out, prepare to find a new place of employment. Unfortunately, some toxic employees are too deeply entrenched in an organization, and management would rather out you than them.

But despite how it sounds, this is a good thing. Remember the health effects of a toxic work environment we talked about before? Well, that’s made all the worse in a workplace with management that chooses to look the other way. In this case, it’s simply time to think about leaving.

The Path to a Healthy Workplace

The way toward a peaceful workplace is paved with open communication, genuine respect, and a sincere effort to understand those around you. Most troublesome co-workers can be brought to the light, so to speak, with a little work.

But when you’re faced with someone truly and deeply toxic, whose goals revolve around hurting others, your tools have to become stronger, and sometimes, leaving for greener pastures is the only option.

Don’t be afraid to try each of these steps if you’re encountering bad workplace behavior. Think each of them through very carefully and implement them with respect and dignity, and you’ll soon find yourself much happier in those eight to twelve hours you spend at work each day.