This sulfurous salt plays a nifty trick in the vegan kitchen, but deserves a spot in every pantry.

Reading the ingredients list for an Indian chaat recipe, or maybe a vegan egg salad, might prompt you to stop and wonder: What is black salt? This Asian salt offers a sulphury, umami taste that can add depth to traditional dishes, vegan meals, and snacks. Here’s what you need to know about black salt, including what’s in it, what it tastes like, and how you can use it.

What Is Black Salt?

Black salt is processed Himalayan salt. Also known as kala namak, Indian black salt, or Himalayan black salt, it’s most frequently used in Asian cuisine. (And it’s not to be confused with Hawaiian black salt or black lava salt, which is a blend of sea salt and activated charcoal.)

Indian black salt starts as pink salt, which is heated along with harad seeds and other Indian spices, seeds, and herbs. The heating process gives it a darkened hue, which is why it’s known as black salt. But its actual appearance can range from a brown pink to purple, usually with a light pink hue when ground.

Using black salt in Asian and particularly Indian dishes can make flavors more rich and authentic. But black salt’s flavor benefits aren’t limited to cultural cuisine. Used in place of regular salt, it can step up the flavor of any dish. 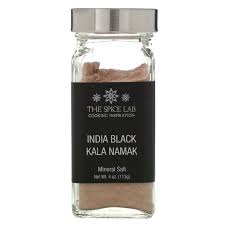 The primary flavor of black salt is savory, and the aroma of the harad seeds is sulphury. The sulphur gives it an umami-like flavor that’s similar to a boiled egg yolk. Pungent, sour, and smoky, black salt offers a rich, mineral taste. Black salt packs a lot of flavor, so you may not need to use as much of it as you would regular salt.

Is Black Salt Good for You?

Black salt may be lower in sodium than typical table salt, but that doesn’t mean it’s a health food. It can be an alternative salt for people who are looking for a way to reduce sodium intake, though sodium content can vary depending on how each brand’s salt is processed. Like any other salt, you should only use as much black salt as you need to impact the flavor of a dish.

There may be more minerals in black salt than table salt, but it doesn’t necessarily offer major health benefit potential. A higher mineral content could be helpful, but it would take a lot of salt to get enough additional minerals to impact your health. And as with black salt’s sodium content, the content of other minerals in the salt can vary depending on the brand.

How Can You Use Black Salt?

Black salt is often used in traditional savory South Asian dishes, including chaats, curries, salads, chutneys, and raitas. Many dishes that call for black salt would not be the same without it, so if you see black salt in a recipe, you’re missing out if you skip this ingredient.

But black salt uses aren’t limited to traditional recipes. Black salt can be a vegan staple. Reminiscent of eggs, it adds the smell and flavor of egg yolks to dishes without actually adding eggs. When you add black salt to tofu scrambles, the dish takes on a more eggy, umami quality. It’s a good choice for other tofu dishes, roasted vegetables, and sandwiches, especially with avocado.

Try black salt in these dishes:

Black salt can be a tasty addition when sprinkled on snacks, fruit, and vegetables, too. Try it on:

Where Can You Get Black Salt?

You’re sure to find black salt at an Indian grocery store, but other supermarkets may carry it, too. If you’re buying black salt in bulk, you may want to look online. Keep in mind black salt may be labeled as kala namak, Indian black salt, or Himalayan black salt.

Black salt is usually sold ground, but may come as a rock salt which you can grind on your own. If your black salt comes in a loose bag, be sure to store it in an airtight container after opening, such as a spice bottle, so you can retain the aroma and freshness of the salt.

What are the Things to Look for When Choosing a Cannabis Dispensary?

Tips For Planning A Disabled-Friendly Vacation